This book is a provocative study devoted to comprehending and comparing the history, political identities, and values of Orthodox, Islamic and Western culture in order to better understand the history of the world in which we live. 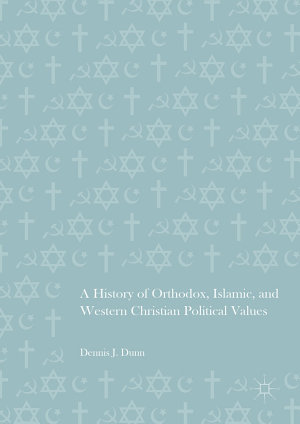 The book reveals the nexus between religion and politics today and shows that we live in an interdependent world where one global civilization is emerging and where the world’s peoples are continuing to coalesce around a series of values that contain potent Western overtones. Both Putin’s Orthodox Russia and regions under the control of such Islamist groups like ISIS and Al Qaeda resent and attempt, in a largely languishing effort, to frustrate this series of values. The book explains the current tension between the West and Russia and parts of the Muslim world and sheds light on the causes of such crises as the Syrian Civil War, Russia’s aggression against Ukraine, and acts of terrorism such as 9/11 and the ISIS-inspired massacres in Paris. It shows that religion continues to affect global order and that knowledge of its effect on political identity and global governance should guide both government policy and scholarly analysis of contemporary history.