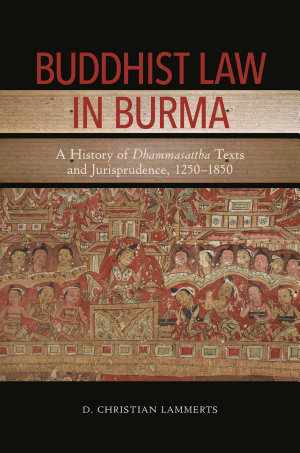 Burma and neighboring areas of Southeast Asia comprise the only region of the world to have developed a written corpus of Buddhist law claiming jurisdiction over all members of society. Yet in contrast with the extensive scholarship on Islamic and Hindu law, this tradition of Buddhist law has been largely overlooked. In fact, it is commonplace to read that Buddhism gave rise to no law aside from the vinaya, or monastic law. In Buddhist Law in Burma, D. Christian Lammerts upends this misperception and provides an intellectual and literary history of the dynamic jurisprudence of the dhammasattha legal genre between the thirteenth and nineteenth centuries. Based on a critical study of hundreds of little-known surviving dhammasattha and related manuscripts, Buddhist Law in Burma demonstrates the centrality of law as a crucial discipline of Buddhist knowledge in precolonial Southeast Asia. Composed by lay and monastic jurists in prose and verse, in Pali, Burmese, and other regional vernaculars, dhammasattha were intended for use by judges to guide the adjudication of legal disputes. Lammerts argues that there were multiple, sometimes contentious, modes of reckoning Buddhist jurisprudence and legal authority in the region and assesses these in the context of local cultural, textual, and ritual practices. Over time the foundational jurisprudence of the genre underwent considerable reformulation in light of arguments raised by its critics, bibliographers, and historians, resulting in a reorientation from a cosmological to a more positivist conception of Buddhist law and legislation that had far-reaching implications for innovative forms of dhammasattha-related discourse on the eve of British colonialism. Buddhist Law in Burma shows how, despite such textual and theoretical transformations, late precolonial Burmese jurists continued to promote and justify the dhammasattha genre, and the role of law generally in Buddhism, as a vital aspect of the ongoing effort to protect and preserve the sāsana of Gotama Buddha. The book will be of value to students and scholars interested in the rich legal, intellectual, and cultural histories of Buddhism in Burma and Southeast Asia, or in the historical intersections of law and Buddhism.