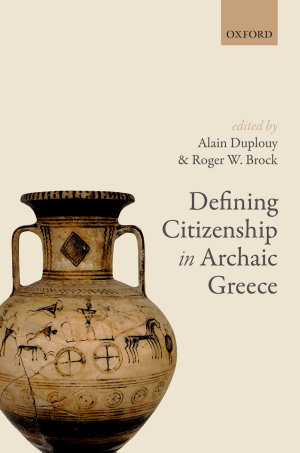 Citizenship is a major feature of contemporary national and international politics, but rather than being a modern phenomenon it is in fact a legacy of ancient Greece. The concept of membership of a community and participation in its social and political life first appeared some three millennia ago, but only towards the end of the fourth century BC did Aristotle offer the first explicit statement about it. Though long accepted, this definition remains deeply rooted in the philosophical and political thought of the classical period, and probably fails to account accurately for either the preceding centuries or the dynamics of emergent cities: as such, historians are now challenging the application of the Aristotelian model to all Greek cities regardless of chronology, and are looking instead for alternative ways of conceiving citizenship and community. Focusing on archaic Greece, this volume brings together an array of renowned international scholars with the aim of exploring new routes to archaic Greek citizenship and constructing a new image of archaic cities, which are no longer to be considered as primitive or incomplete classical poleis. The essays collected here have not been tailored to endorse any specific view, with each contributor bringing his or her own approach and methodology to bear across a range of specific fields of enquiry, from law, cults, and military obligations, to athletics, commensality, and descent. The volume as a whole exemplifies the living diversity of approaches to archaic Greece and to the Greek city, combining both breadth and depth of insight with an opportunity to venture off the beaten track.