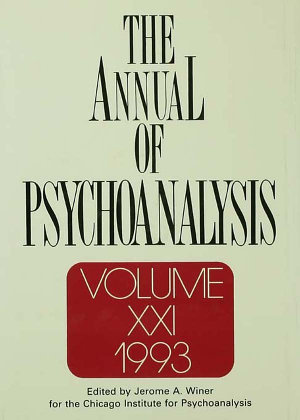 Volume 21 of The Annual of Psychoanalysis is especially welcome for bringing to English-language readers timely contributions from abroad in an opening section on "Psychoanalysis in Europe." The section begins with a translation of Helmut Thomae's substantial critique of the current state of psychoanalytic education; Thomae's proposal for comprehensive reform revolves around a redefinition of the status of the training analysis in analytic training. Diane L'Heureux-Le Beuf's clinical diary of an analysis focusing on the narcissistic elements of oedipal conflict probes the degree to which the analytic method can be applied to "nonstructured" analysands. And Nella Guidi shows the clinical value of supplementing Freud's notion of unobjectionable positive transference with the complementary notion of unobjectionable negative transference. Section II, on "Psychoanalysis and Hysteria," offers original contributions to Freud scholarship in the form of Jules Glenn's reconsideration of Dora's "Dynamics, Diagnosis, and Treatment"; William McGrath's analysis of the way Freud's hostility to religious superstition gained expression in his early work on hysteria; and Marian Tolpin's self-psychological reprise on the case of Anne O. The section concludes with Elisabeth Young-Bruehl and Sarah Cummin's provocative "What Happened to 'Anorexie Hysterique'?" which questions the contemporary separation of anorexia from hysteria and explore the sociohistorical reasons the separation came about. Section III, "Clinical and Theoretical Studies," begins with Nancy Kobrin's discussion of Freud's ideas about autonomy, including the terms Freud used and the way Strachey translated them into English. Her goal is to deepen our understanding of how Freud spoke and thought about an individual's sense of self. Frank Summers shows how object relations principles, which are shared by various object relations theories, can inform the conduct of analysis at all levels of pathology, including neurosis. And Henry Smith examines the meaning and value of the "analytic surface," a metaphor that highlights the relationship between the analyst's attention and the patient's attention. A final section on "Applied Psychoanalysis" offers contemporary examples of applied analytic inquiry in anthropology, art, and literature. Roy Grinker, III and Roy Grinker, Jr., in a methodological contribution to psychoanalytic anthropology, examine what is revealed when a native people (here the Lese of northeastern Zaire in Africa) are asked to retell a story (here the story of Cain and Abel) introduced by them by their Western observers. Danielle Knafo explores the art and life of the Mexican surrealist Frida Kahlo through the concepts of the mirror, the mask, and the masquerade. And David Werman closes the volume with a comparative study of Edgar Allan Poe's and James Ensor's obsession with revenge, and the role it played in Poe's writing and Ensor's etchings, respectively. Bringing readers the influential reform proposals of Thomae, a rich sampling of recent Freud scholarship, applied contributions traversing three disciplines, and original clinical contributions reflecting American and European sensibilities, Volume 21 of The Annual is true to the spirit of this distinguished series. It testifies to the scope of analytic inquiry, and it exemplifies the yield of such inquiry in the hands of gifted scholars and clinicians. 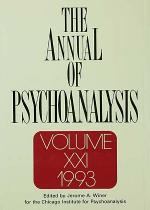 Authors: Jerome A. Winer
Categories: Psychology
Volume 21 of The Annual of Psychoanalysis is especially welcome for bringing to English-language readers timely contributions from abroad in an opening section on "Psychoanalysis in Europe." The section begins with a translation of Helmut Thomae's substantial critique of the current state of psychoanalytic education; Thomae's proposal for comprehensive reform 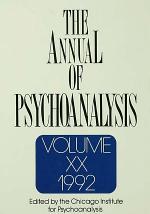 Authors: Jerome A. Winer
Categories: Psychology
Volume 20 of The Annual of Psychoanalysis ably traverses the analytic canvas with sections on "Theoretical Studies," "Clinical Studies," "Applied Psychoanalysis," and "Psychoanalysis and Philosophy." The first section begins with Arnold Modell's probing consideration of the paradoxical nature of the self, provocatively discussed with John Gedo. Modell focuses on the 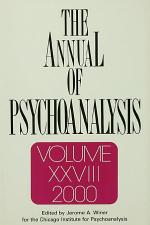 Authors: Jerome A. Winer
Categories: Psychology
Volume 28 of The Annual features stimulating, original essays on the relationship between psychoanalysis and the neurosciences. Edelman's Neural Darwinism informs Barry's investigaton of the psychoanalytic theory of internalization and Fajardo's reassessment of "breaks in consciousness" whereas Gedo's hierarchical model of mental functioning informs Fisher's presentation of the treatment of 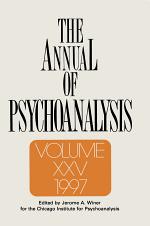 The Annual of Psychoanalysis, V. 25

Authors: Jerome A. Winer
Categories: Psychology
Volume 25 of The Annual is dedicated to the memory of Michael Franz Basch, who achieved distinction as both a psychoanalytic theorist of the first rank and an authority on the nature and conduct of dynamic psychotherapy. A wide range of original contributions bear witness to his theoretical, clinical, and 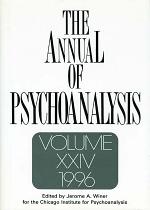 Authors: Jerome A. Winer
Categories: Psychology
Volume 24 of The Annual opens with a memorial tribute to the late Merton M. Gill (1914-1994), a major voice in American psychoanalysis for half a century. Remembrances of Gill by Robert Holt, Robert Wallerstein, Philip Holzman, and Irwin Hoffman are followed by thoughtful appreciations of Gill's final book, Psychoanalysis